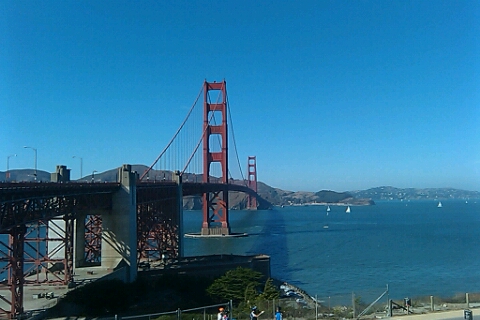 These three photos below were taken on Golden Gate bridge.
The first is San Francisco. 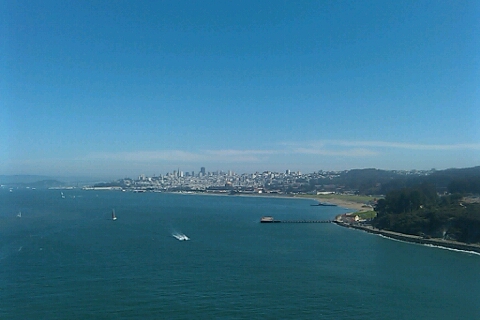 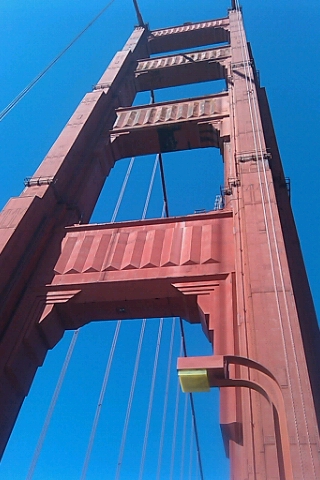 The last is a shadow of Golden Gate Bridge reflected on the surface of the water.
How is this photo?
I like this very much! 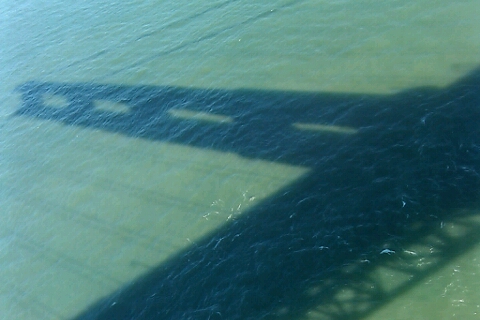 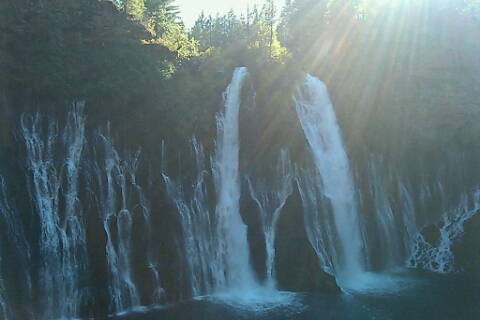 The next day, first we went around Lake Siskiyou near Mt. Shasta.
This photo was taken at the beach, one of some places to make a stop.
I think here was a place with a nice view. 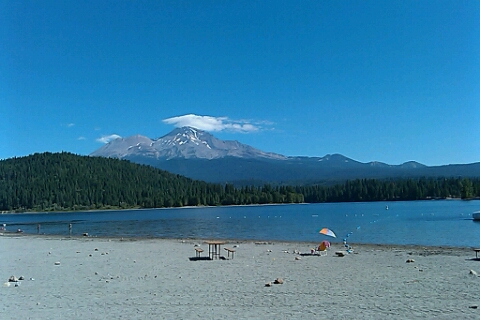 Next, we visited the Springhead of Sacramento River, where is famous for water of Crystal Geyser.
I drank the water.
Water was very cold, fresh and tasted good!
I thought water of springhead was much better than bottled water. 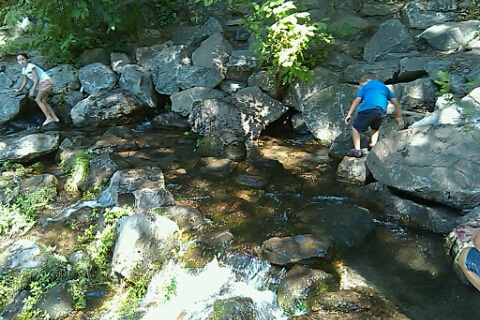 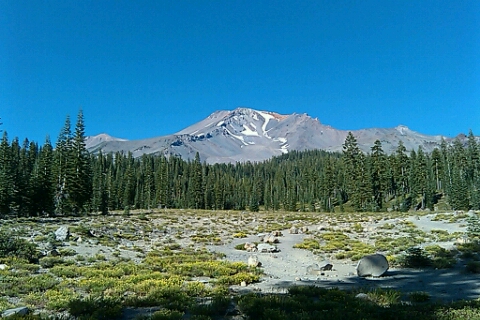 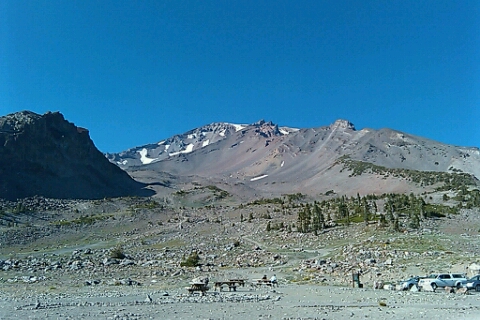 ﻿
The last day, we made a stop at Lake Shasta Caverns on our way home.
We participated in one-hour tour, and we crossed Lake Shasta by boat.
After getting off the boat, we climbed a mountain by bus and reached the entrance of Lake Shasta Cacerns.
Once inside, it was very cold compared to outside air temperature.
And there were big and a lot of limestone.
We were very excited in the cavern!
The photo above is Lake Shasta and was taken at the cavern entrance.
The photo below was taken in the cavern. 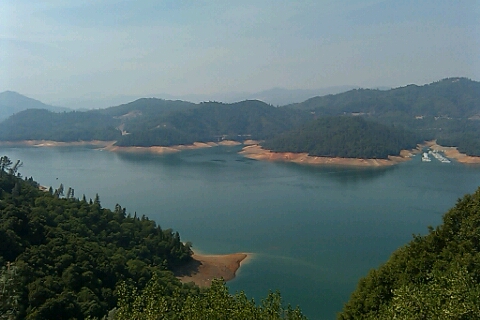 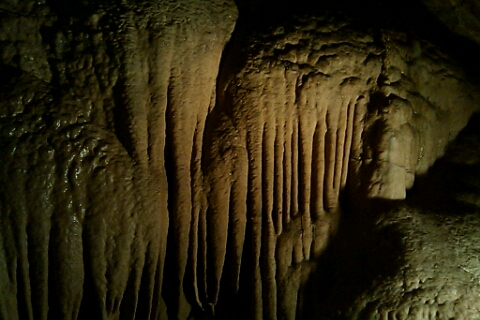 
This travel was very fun for us!

First, I drove the road called "17 Mile Drive".
In 17 Mile Drive, I parked at Spanish Bay along the Pacific Ocean where Spansh explorer and his crew went ashore and camped in 1769 while searching for Monterey Bay.
And I took photos there.
It was very windy and cold there! 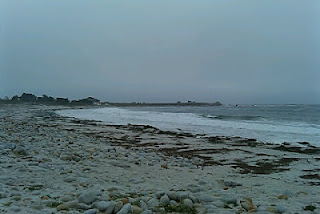 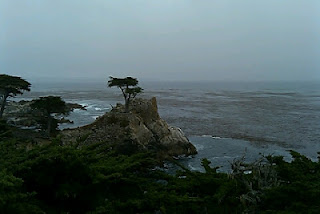 Second, I went to Cannery Row and Monterey Bay Aquarium.
This photo was taken at Cannery Row.
This building that was a cannery before is used as a shop without change now.
There are some buildings like that, and those buildings create a traditional atmosphere there. 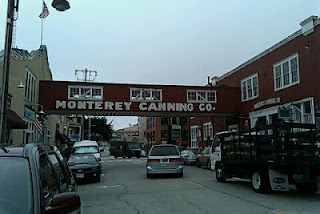 This photo is taken at Monterey Bay Aquarium.
This aquarium is very big and have many kinds of creatures in Monterey Bay.
This is a jelly fish that was swimming very slowly in water.
I like jelly fishes. 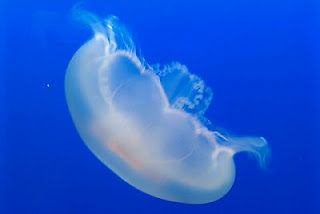 What a beautiful blue!

I went to South Lake Tahoe on July 13-15, 2012.I saw Lake Tahoe there.
Lake Tahoe is the most beautiful lake among some lakes I've seen, I think.
This lake is 1,645 feet deep at its deepest point, making it the 10th deepest lake in the World, and the third deepest in North America.
As you can understand from these facts, Lake Tahoe is very clear.


This photo below was taken at Pope Beach in South Lake Tahoe.
The lake water was so clear and its surface displayed a color gradations from light green to ultramarine.
I touched the water, it's so cold!
Nevertheless, many families were swimming at the beach...I couldn't think. 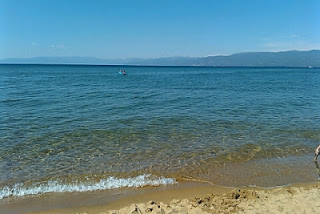 This photo below was taken on the deck of Tahoe Queen during Tahoe Queen cruising.
This blue was truly blue, I think it's Tahoe Blue! 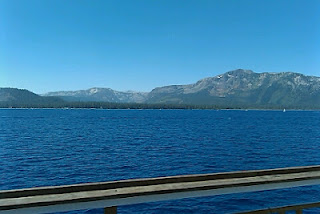 This photo below shows the surface of lake water.
I think you can understand how clear Lake Tahoe is. 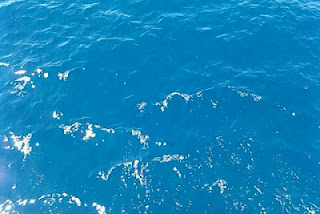 This dandelion was blooming at the lawn in my condominium.
The dandelion was short I wonder if the lawn got a lot of sunshine.
A brilliant yellow in the green was beautiful! 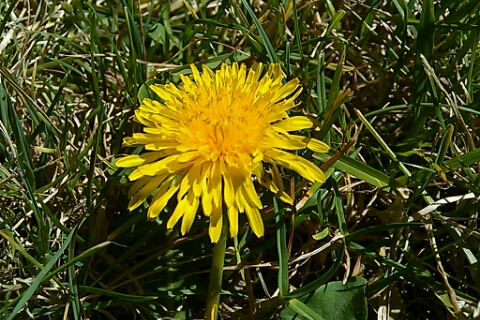 For your information, this photo is used in top page of my Japanese blog.
Please see my blog, if you like!
投稿者 CICCI 時刻: 15:43 0 件のコメント:

This photo was taken at lawn in my condominium on a sunny afternoon.
Many bees had clover nectar like crazy, I wondered if they might be hungry.
They were crazy about their lunch, while my daughter was watching their action like crazy. 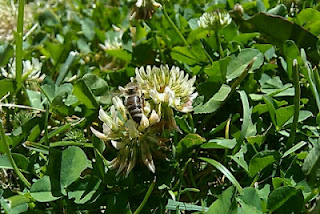 I went to Grand Canyon on June 1st, 2012.It was hot and the temperature was a high of 30 degrees.
But it was not so humid and it was more comfortable than Japan to spend.
Gand Canyon was so magnificent and broad!!!
It was too broad to take one photo!!!